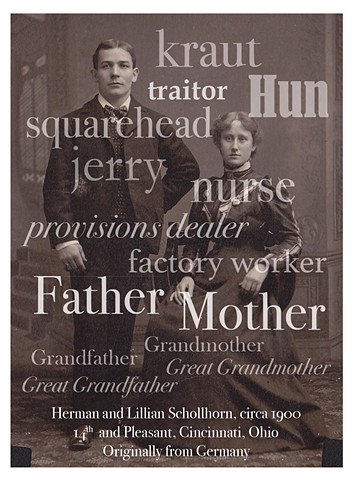 City of Immigrants: The Great-Grandparents
Inkjet print
8 x 6 inches
next >

This piece is in response to the immigration policies put forth by the Trump administration in 2018, including the “zero tolerance” policy separating children from their families, attacks on DACA, the travel ban to Muslim-majority countries, and the escalation of troops along the Southwest border.

I reflected on my own family history and immigration. Unless you are Native American, your ancestors are from somewhere else. In my case, my family is German which is very common in the Cincinnati area. My paternal great-great grandfather came to the US after the Revolutions of 1848 in Germany, fought for the North during the Civil War and settled in Cincinnati afterwards.

My mother’s family is Scots-Irish, coming over during colonial times and settling in North Carolina and then eastern Kentucky. They emigrated to Cincinnati with the first wave of Appalachians in the 1920s, looking for work and a better way of life.

My family is white/causasian. We are not of color, never enslaved. Yes, we were able to assimilate eventually although there were obstacles and resistance. We had it easy -- considering. We assimilated.

What is assimilation? Do all groups need to totally assimilate? Many questions came to mind.

And consider the city of Cincinnati itself, specifically Over the Rhine, where all these immigrants, German and Appalachian, first settled. How it has changed over the years! Identified by many names and now it’s the quite fashionable OTR. But it remains a city of immigrants.